It’s kitten season at the Shelter (as it is most of the year). Who doesn’t like to look a photos of kittens being adorable? (quiet, you dog people!) The kittens in these photos have been adopted, but there are plenty more where these came from. (One photo is badly out of focus, but the kitten was so amusing I had to include it.) For lots more wonderful pics of cats, kittens and dogs, check out the Shelter’s Facebook page. 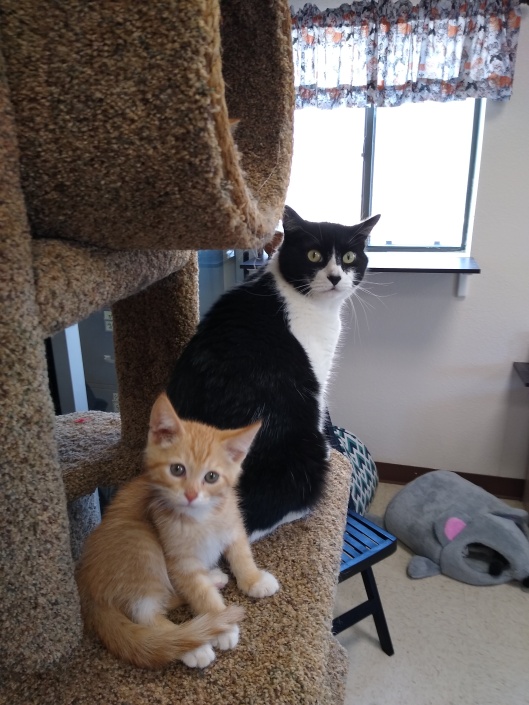 Last spring one of the Shelter’s volunteers, the divine Miss P., hosted a fund-raising event in her community. It was wildly successful and she raised a ton of money, all of which she donated to Paws and Claws.  Here she is, wearing her Crown of Magnificent Accomplishment with the Head Kennel Tech from the Shelter at a very serious recognition event hosted by Shelter staff. 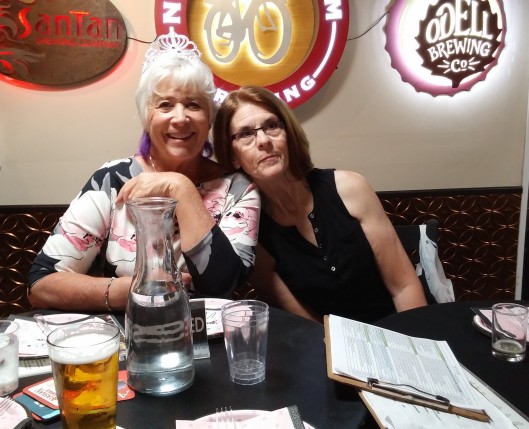 Her wish was that the money be used to build a cat room. Or rather, to renovate our meet-and-greet room, which also serves as a photo studio (used by the Shelter’s fantastic photographer, Audrea Donnelly), and turn it into a room where cats can roam freely, sit in windows, fight with one another, and in general look so appealing that they will be adopted.

Shortly after the above photo was taken Miss P fled our hot valley for cooler climes. She will return in a few weeks (even though it’s still way too hot), and when she does, she will find the room, almost completed and fully occupied. The cats were able to move in a few weeks ago, just in time for our Clear the Shelter event. The renovations included dropping a new ceiling, replacing a solid wall with a glass wall, and adding a new door. In addition various bits and pieces of cat-friendly furniture have been drifting in.  The room isn’t quite finished yet; still to come are climbing shelves on the walls, and moving out some unneeded furniture. But this is what Miss P will find when she gets back:

Unfortunately this pic is a bit out of focus (like the photographer??)

Some kitties like to be in their kennels, some prefer to be out.

These babes have grown so much they are almost ready to go home now.

Uncle Gene. For a short time he was our mascot, but he has been adopted. What a lover – we miss him.

The room, working as it is meant to! 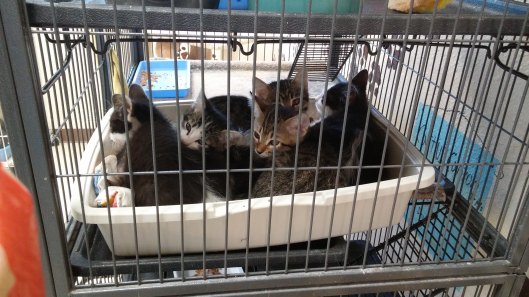 These two photos were taken on Clear the Shelter Day. The ones old enough to go home were all adopted that day.

Just this last Saturday when we arrived at the Shelter we noticed a raggedy looking large box by the front door.  I paid it no heed, but one of the other volunteers looked in and found a terrific cat tree, brand new and still unassembled. She brought it in, and we set to work. It was slow going until a lovely couple came in and jumped in to help. In short order the tree was together and installed in the new room. Many thanks to the anonymous donor and to the couple who did 90% of the assemblage, thus saving the wits of two ‘older’ volunteers! 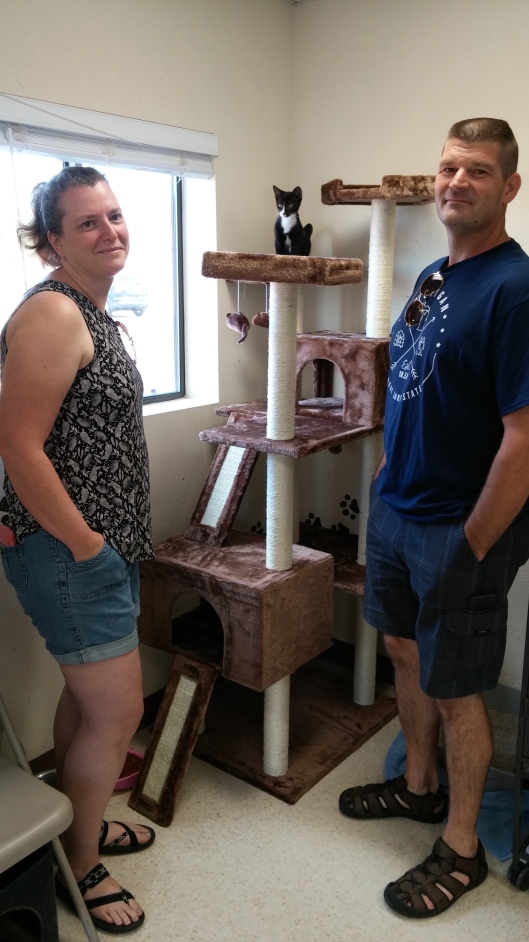 This was a complete photobomb. That little tuxedo kitten put himself there while the photographer was instructing the volunteers to smile. THANK YOU for putting the cat tree together!!! It had a Lot of pieces.

The last dribs and drabs of ‘stuff’ for the tag sale are arriving at the Paws and Claws Care Center in Apache Junction. Most of the year the donation wagon is filled with food and accessories for the animals. Toys, litter (for the cats), towels and bed linens for the beasties are the most common donations after food. But lately we have been receiving all manner of goodies for the tag sale – it promises to be quite an event!

When I started at the Shelter I asked my boss if we could keep a list of people who brought things in and write each of them a thank-you note. Turns out there are far too many people supplying the Shelter to undertake such a task. Some days the wagon has to be dragged to the back and emptied more than once a day. There is no end to the generosity of the community when it comes to the Shelter.

A lovely retired gentleman turns up now and then with cat pans that he has fitted out to accompany kitties home when they are adopted. What a lovely thing to do! He told my boss that he had a done a lot of fun things in his life, but that nothing gives him more satisfaction than shopping for good deals on cat items and assembling the Adoption Boxes.

Meanwhile, cat life at the Shelter is a bit calmer than it has been for the last couple of months. We had a kitten season that would not quit. One day I counted close to 40 kittens, some with their mums, some that had been found.

This gentle little girl had five babes. They look like little worms in the photo – they were only 2 days old. Her kittens have been adopted, and just this week Mama went to her new home. 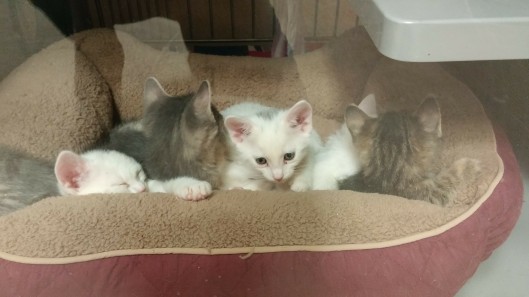 Nothing is much cuter than a basket of kittens. These were photographed thru glass, so it’s not much of a pic, but you get the idea.

Same for this little fuzz-nut. He is a quite adorable, active kitten.

Now we are down to perhaps a dozen kittens, and only a dozen or so adult cats. They are all beautiful. Each has a unique character and they can be quite amusing. We have a bony black mama with long silky hair, very affectionate. She was terribly thin after nursing her babies, but now that she’s on her own she’s gaining weight and looking silkier and more beautiful every day. When she meows she opens her mouth very wide – it is the funniest thing to see. The mew isn’t loud, but her red mouth in contrast to her black face is full of drama. 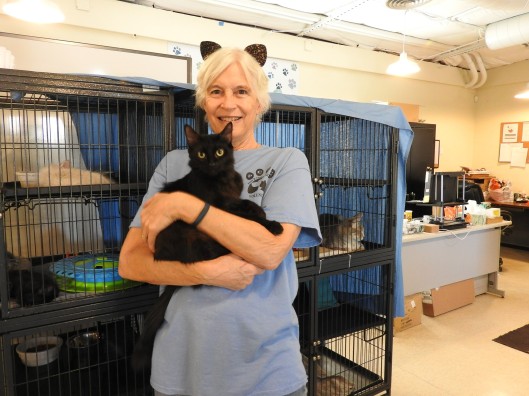 Sooner or later each cat goes home. Some stay for several months, but eventually the right person appears for each one. It’s heartwarming to see the love and support people have for their animal shelter, and their generosity. These are the unsung heroes of the Animal Shelter, the people who bring gifts, the people who take home companions.