I guess writing about Monsoons last time brought bad luck. On July 10 a particularly heavy Monsoon hit the Valley and did quite a bit of damage. You can see a video of some of the damage in our town here. I’m very sad to say that the pile of sticks that was a house under construction is the new house that Speedy and I are building. Here is a slide-show of valley-wide damage (with, inexplicably, a family’s swimming photos at the end).

For us, the good news is the mess has been cleaned up and the men are back at work – but it was a set-back. Here is a video I took just the day before of some of the trusses being installed  (apologies for the loud generator on the audio – you may want to turn down your volume) – all that work blew down later the same night. As they say in Italy, pazienza.

A week later, Monsoon waters washed away a family, killing 10 people. I wish the Raya family could have had our luck. Yes, we lost some building, but no one was hurt. I guess you could say we were fortunate.

Monsoons can be vicious and violent. They are not something to take lightly.

Speedy and I were pretty happy this spring as we watched the olive trees blossoming – it looked to be a good year for olives, something we haven’t enjoyed for the last four or five years.  Then came the summer that wasn’t. Uncharacteristically cool and wet, the hot dry days we expect in July and August never materialized. For the first time since we’ve lived here I did not have to water the gardens at all.

The olives didn’t like it. The first problem is an annual problem, but one that has never been as bad as this year: the Mediterannean fruit fly.

This little stinker, only about 1/4″ long, has an ovipositer that allows her to deposit her eggs in ripening olives. The maggots that hatch dine on the meat inside the olive until they are ready to burrow out, leaving behind a black and mushy mess. We’ve always had some fruit with the tell-tale dots that show an egg has been laid. This year we’ve had ample evidence that the larvae flourished. Why they were more successful this year than other years I don’t know; I think I’ll blame climate change.

Two other problems, certainly climate related, are a kind of rusty growth on the fruit that is called either anthracnose or soft nose. I don’t know enough about either of these conditions to know which has affected our olives; I just know that either one leaves the fruit completely damaged and useless.

Usually at this time of year, if we are having a good year, we are dragging out nets, olive rakes and sheets for our own particular style of harvest. (You can read about our harvest by pressing here and here.) This year there is no point. 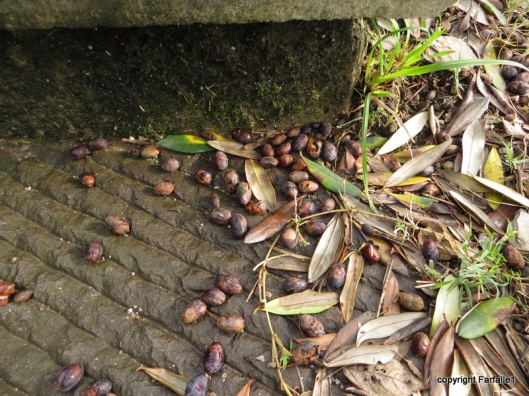 Many of the olives have turned dark prematurely and have fallen off the trees on their own. There’s no telling what quality of oil might lie within the few hardy individuals that are still clinging to the trees. We’re not going to invest the not inconsiderable time and effort to find out.

Ours are not the only trees thus affected. We have heard from friends that no-one in our part of Italy has an olive harvest this year. This is a pity for those of us with trees, but it’s a misery for the people who have the business of pressing olives. They will have few customers this year. Fortunately for olive-oil lovers, we have also heard that the crop in the south is excellent this year. With luck they will pick up the slack for those of us in the north.

One thing that never seems to die is hope – and I just know that next year will be the best year ever for olives.

You may have heard about the terrible flooding that killed six people in Genova three years ago. Poor Genova! Again the Bisagno River overflowed and went crashing through the city’s streets, tossing cars around like matchsticks, leaving a trail of mud, debris, ruined businesses and homes, and at least one person dead. 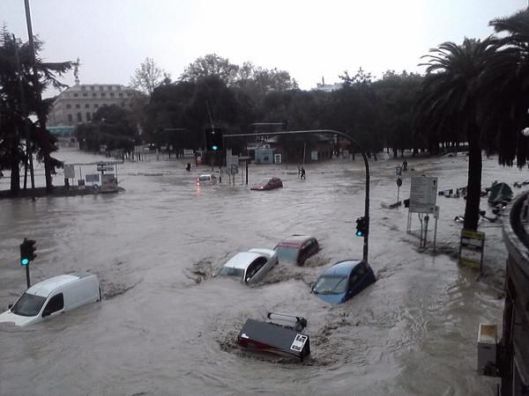 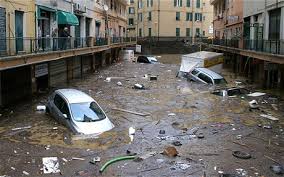 Photo courtesy of The Telegraph

Photo courtesy of The Herald Sun

Other parts of Liguria were hard hit by the fierce electrical storms, which went on for hours and knocked out power to many zones of Genova. In our own small area of Rapallo we received some damage. Above us a landslide closed the road that leads to the Valley behind us. Below us trees fell down into the road, damaging a guard rail. Enough were quickly removed to open up one narrow lane for traffic. Seems like very small patooties compared to what’s happened in Genova.

More rain fell this morning (Saturday, Oct. 11) with more forecast for this afternoon and tomorrow.

Liguria is a narrow bean-shaped region that hugs the Mediterranean, with high mountains that tumble right down to the sea. The mountains all drain into stream beds which, for most of the year hold only a trickle of water. Workers were mowing the weeds from our own San Francesco torrente just a couple of months ago. This is what it looked like today: 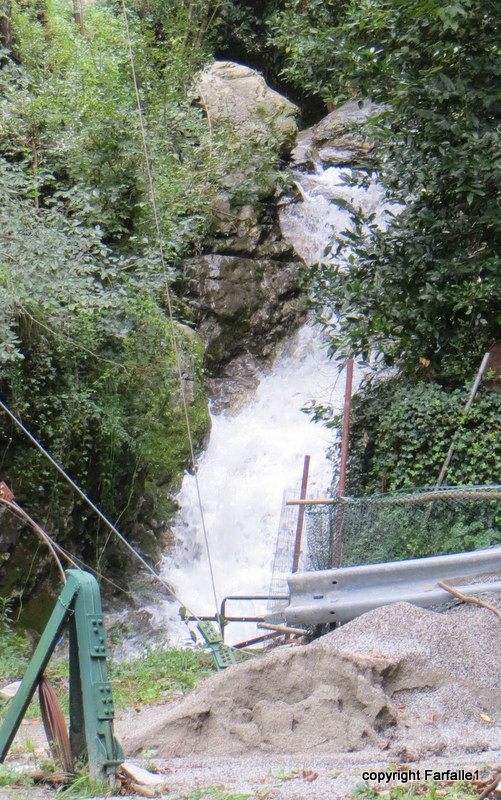 It always amazes us when we open our windows or go outside after a big storm and hear the roar of falling water that fills the valley. We were lucky because the water stayed within its banks. Genova, which is also built on the thin strip of land between mountains and sea, had worse luck.

“It’s a mass of problems together. You have houses built in the wrong places, inadequate water channelling systems, poor planning and administration,” Carlo Malgarotto, president of the council in the region of Liguria, told Reuters.

Rapallo did a bit of planning a few years ago. To prevent debris from catching on a bridge that might then back up the Boate River, they decided to rebuild it so that it could be raised in times of flood. Why? There is a new cathedral being finished upstream and a large underground parking area is part of the project. The goal was to keep the parking safe and dry. They were able to raise it yesterday, no doubt to the satisfaction of all involved in the project. 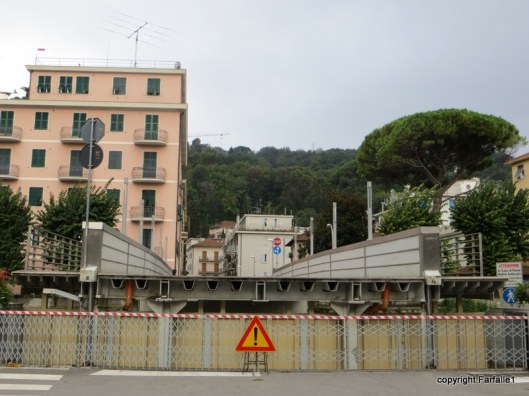 It’s a bit of an inconvenience for people who would like to use that bridge. As you can see below, the water was not really high enough to reach the bridge at all – but better safe than sorry.

Unfortunately Genova has not had as good luck with the plans they made after the 2011 flood. According to Reuters:  “Environment Minister Gian Luca Galletti said in a statement that 35 million euros ($44 million) had been earmarked to reinforce flood defences around the Bisagno but the funds had been blocked by a legal dispute.”

Sadly that sounds exactly like Italy. It doesn’t seem to be a country that has embraced the idea of citizens co-operating for the common good. Rather, people are much more likely to be watching out for their own interests and trying to see what they can gain personally from any project. I guess that makes Italy like a lot of other places.

Meanwhile, more rain is forecast. Fingers crossed for Genova, because they already have their hands full.

Courtesy of 3B Meteo

Addendum: We visited the Port on Sunday and found the aftermath of the storm: flotsam, jetsam and a lot of driftwood that had already been pulled out of the water. There was so much rubbish among the boats that the water was invisible. 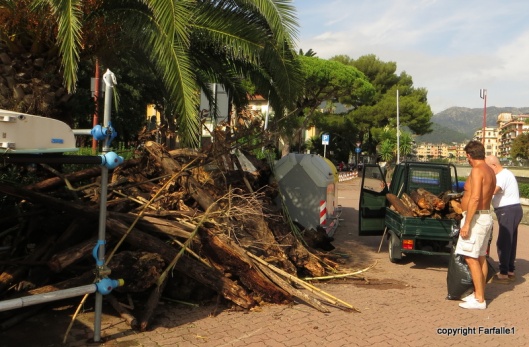 Virga, which is very common here in the southwest U.S., is a shaft of rain which evaporates before it reaches the ground. You can see short streaks of it under the lower cloud in the photo above.  The sky is frequently beautiful here in Arizona at sunset, but not usually quite as dramatic as this one. You’ll see it more clearly if you click on the photo. The snail has landed!

Yesterday and today’s main topic of conversation: the hail storm of yesterday morning. 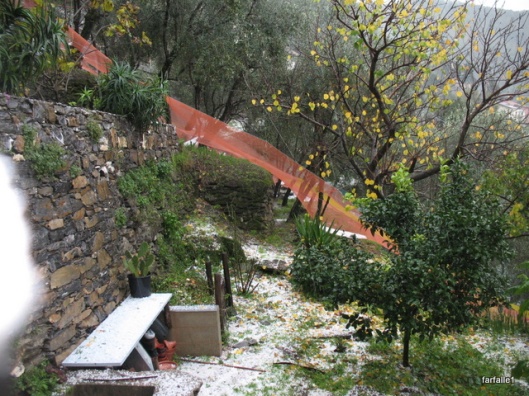 Fortunately the ‘grandine’ weren’t large enough to do serious damage, but we lost our entire pomegranate crop – both fruits. A grave disappointment. As well a struggling patch of late season lettuce was flattened.

It’s olive picking time again, and our neighbors have put up their nets. As you can see from the photo above, though, so far they have collected only hail, and plenty of it. Though it arrived yesterday morning, it is still in the nets this evening.

I was able to do our olive ‘harvest’ in about two hours today; this is the second year post-pruning that we have not had a crop. However, if you’re interested in reading about and seeing photos of our 2008 harvest, click here and here…  We didn’t have a hail storm that year. 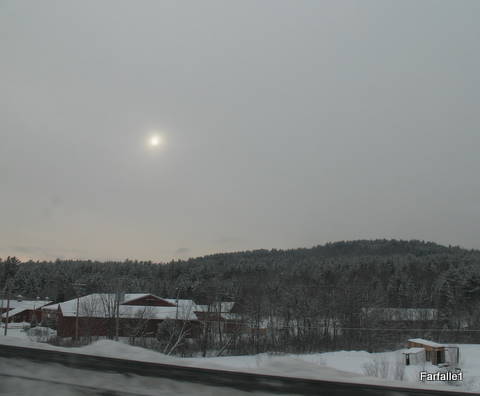 No, this is not a black and white photo… see that brush of brown on the shed, bottom right?  a hint of red in the barn?  This is New England winter, just as I remember it:  life lived many days in black, white and shades of gray.  That little faint ball in the sky?  Yeah, that’s the sun.  Sort of.

We lived in New England for decades and loved it, but having been away for several years it is a shock to place oneself in Vermont in January.  -20 F (-29 C) is very, very cold.  So cold that when you go out to feed the shivering birds your hands become numb almost immediately.  The good thing about -20 F is that it is accompanied by cloudless blue skies – the sort of frigid blue that makes the phrase ‘blue is a cool color’ seem completely inadequate.

Here are some of the superficial differences between winter life in New England and winter life in Rapallo or Arizona:  1) It takes 5-10 minutes to bundle up to go outside, even for a few minutes work or fun; another 5-10 to unbundle when back indoors.  2)  One’s appetite increases geometrically as the temperature plunges – the colder it is, the hungrier we are and the more we eat.  3) Exercise – you can take a crunchy walk in the snow on the verge of the road, but you won’t stay out long.  Or you can ski, skate, or winter hike, each of which may well involve a drive somewhere.  4) And if you decide to take that drive… well, I’ll let the photos below from our trip back to the airport tell the tale: 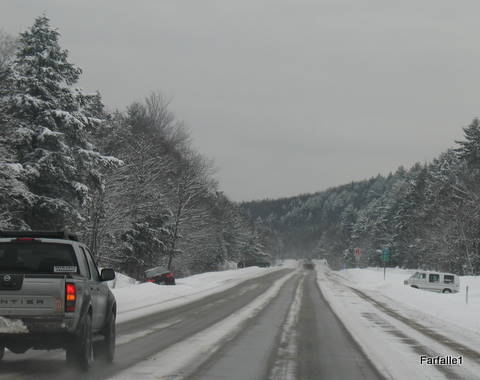 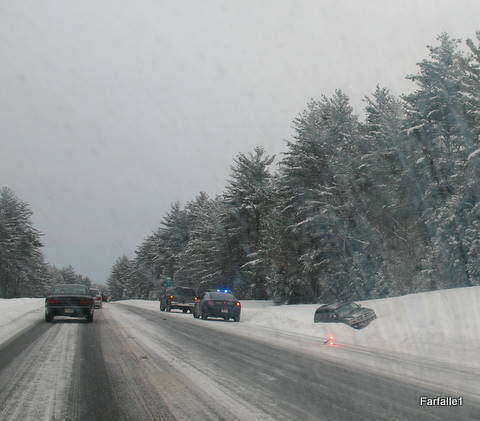 In all we saw a total of 10 cars off the road on a 30-mile stretch of  Interstate 89 in New Hampshire.  Fortunately we did not suffer this fate and I reached my plane, thanks to daring driving by M.,  with 15 minutes to spare.

Stepping into the 70 F night air at Sky Harbor Airport was a  shock of another sort, as was smelling the perfume of the blooming  tree off the deck and standing outside, uncoated, to admire the wash of stars in the dark, moonless sky.

Would I go back to New England in the winter?  In a heartbeat.