Quick!  Take me to the Pharmacy! 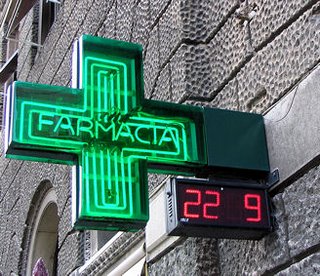 An article in the English edition of ANSA describes a wildcat strike by taxi drivers in Rome.  They are unhappy because the Monti administration, in its package of reforms, wants to loosen requirements to become a cabby.  This is just one of many measures aimed at boosting Italy’s flagging economy and making it possible for young people to find work –  all of which are being offered in tandem with severe austerity measures.

Back in 2007 the Roman taxi drivers were angry, too.  At that time the city wanted to add 1,000 cabs to the stable.  Rome had, at that time, 3 cabs for every 1,000 residents, the fewest of any city in Europe, according to a Marketplace report.

Another of the proposed Monti reforms calls for relaxing the regulations around opening a pharmacy.  As things are now it is almost impossible to open a new pharmacy.  A young person can go to school and become a pharmacist, but without family connections to an existing business, finding a position will be difficult (not impossible, but difficult).  But the entrepreneurial pharmacist who wants to open a new drugstore is just plain out of luck.  The number and opening hours of pharmacies are regulated by law according to about.com.  It is also true that if you want to get aspirin or vitamins you will have to go to a pharmacy where you will find them hideously packaged on foil covered cardboard.  Last time I forgot to bring aspirin from the States I paid € 6 for 30 aspirin.  Speedy says that often when viewing the painkiller section of a Walmart store and seeing 500 Iboprofen selling for $6.28, he thinks an Italian seeing the same shelf would need a cardiologist rather than some pills.  Until recently the only place you could buy prepared baby food was at a pharmacy.  Imagine!

While there is a lot wrong with the pharmacy system in Italy (and probably the taxi system as well), there is a lot right.  There is always at least one pharmacy open within shouting distance, and the pharmacists are highly trained, knowledgeable and able to help with minor medical emergencies, saving one a trip to the emergency room.  But the regulations against competition in pharmacies could be relaxed without reducing the requisite training for pharmacists – that would be good for consumers and for young pharmacists.

The larger problem, of which these two issues are representative, is that Italy is a country strangled by bureaucracy and regulations.  There is no place for young people to find work because all the trades and professions are so busy protecting their own interests that they are unwilling to be open, to expand or to share.  That’s bad for all concerned, it seems to me.  Educated young people live with their parents and fruitlessly hunt for jobs; the professions stagnate and suffer gross inefficiencies due to limited scope and size. Speedy reminded me that the current generation of Italians is called the NEETS (not in education, employment or training) generation (15 to 29 years-of-age), of which there are some 2 million.  These NEETS comprise 11.2 % of this age group in Italy compared to 3.6% in Germany, 3.5% in France, 1.7% in the UK, and but .5% in Spain.  All that talent going to waste!  Clearly, this is a socio-economic problem that will have long-lasting effects unless the new government, and the Italian people, can turn around their unique approach to social management.

To an American it seems ludicrous.  In the States it is relatively easy to start a business – all you need is a good idea and either money, or backers with money.  Granted, some 35% of new businesses will fail within the first two years, but at least one has the opportunity to try.  And if only 35% fail it means  that 65% succeed, giving income and occupation to more people and, because of the competition generated, giving better services and lower prices to society in general .

It will be interesting to see how it all plays out in the months ahead.  In the meantime, don’t get sick in Rome – it might be hard to find a cab to take you to the pharmacy.  And if you’re visiting Italy from the States, do bring your own aspirin.